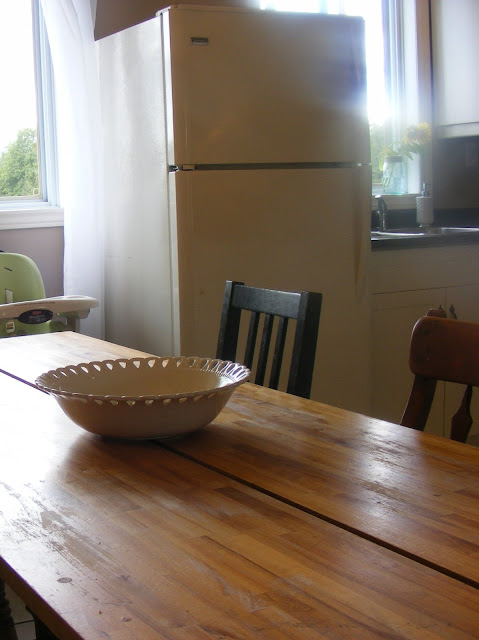 Welcome to the longest post in the history of blog posts.  Don't say I didn't warn you...

As I mentioned yesterday, Luke and I have been working hard at radically decluttering the kitchen.  We are eager to embrace the less is more philosophy in this space that we spend so much of our time.

But I'm hesitant to call it minimalist.  We are a large family that cooks from scratch, entertains often (just last weekend we had nearly 40 people at our house for a birthday party!) and decorates cakes for fun...what is minimal for us would be excessive for many others.

We did try to eliminate multiple items.  We've really discovered that having one of what you need, washing it and putting it away is far more efficient than having half a dozen of them that could at any moment be in the drawer, the dishwasher, the sink or the counter top.  So we have one wooden spoon, one casserole dish (for a baptist homeschooling mom, one casserole dish is pretty radical!)  and one turkey roaster (Yes, I had two of them.  Don't ask....)

I'll confess that a few times I found myself wondering "would a minimalist have this?" and I had to remind myself what we're doing here.  It's not about roughing it or having some bare minimum list of essentials, but about only owning the things that are helping us to lead the extraordinary life we're choosing to lead. It's not about having less for the sake of less, but refusing to consume more for the sake of more. 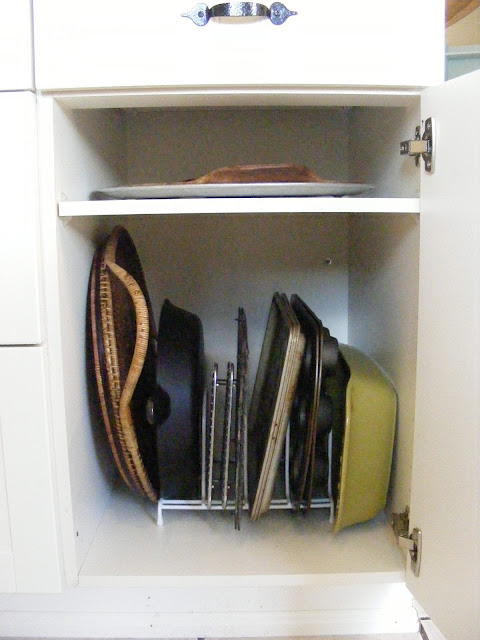 I took a very scientific approach to deciding which  casserole dish to keep....I kept the prettiest one! 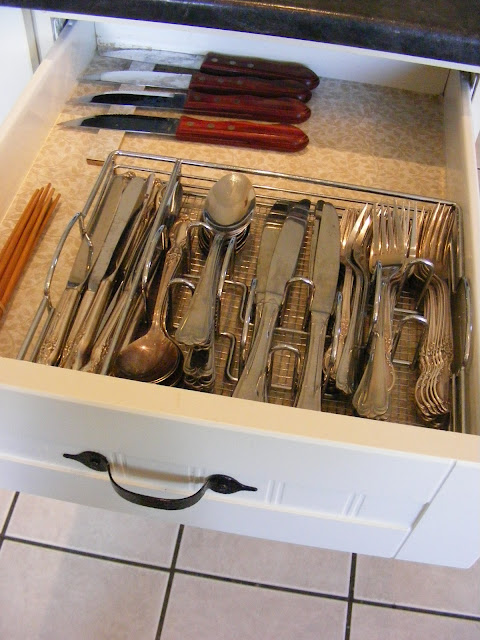 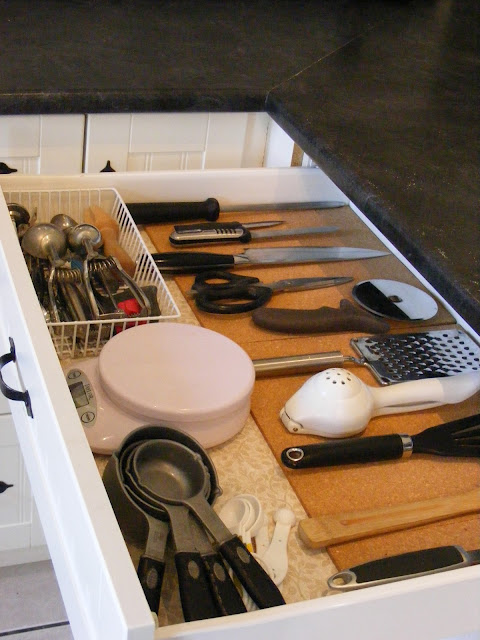 In our cooking utensils drawer we have 3 knives and a knife sharpener, kitchen shears, a pizza cutter, a cheese grater, citrus press, 1 flipper, 1 wooden spoon, 1 ladle, a kitchen scale, a set of  measuring cups and measuring spoons and miscellaneous small tools like the vegetable peeler, can opener and meat thermometer.

We had a whisk too, but I broke it yesterday making buttertarts and discovered that a fork accomplishes the same task pretty well.

I use dollar store cork tiles to keep things from slipping around inside the drawer.  This doesn't work if you slam the drawer, but if you're gentle it works quite nicely! 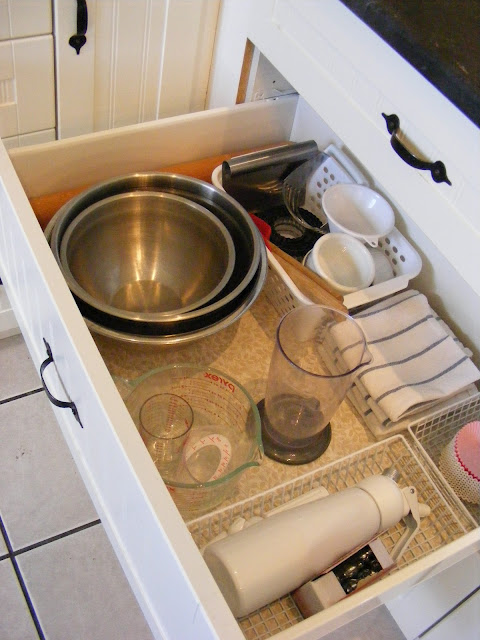 I finally have a baking drawer!  I've always wanted to put all my baking supplies together in one drawer but have never been able because I had too much stuff!

We have 4 mixing bowls, a dough cutter, a pastry blender, a set of biscuit cutters, 4 ramekins, 3 spatulas (probably a little excessive, but I like them all...), a funnel, some measuring bowls, tea towels for covering dough while it rises, and some cupcake liners.

That nifty white device is a whipped cream dispenser. You put cream in it and it comes out like store bought squirty cream but without all the weird additives. Which may seem rather indulgent but we are kinda whipped cream snobs;  in our 7 years of marriage we have never once purchased a can of processed squirty cream, and we wear that fact as a foodie badge of honour! 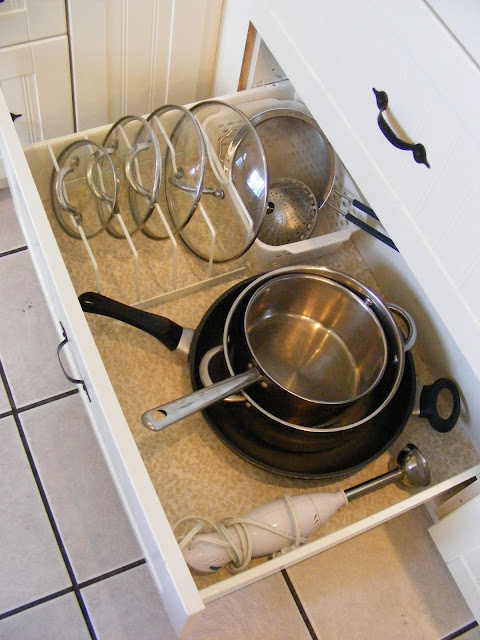 We kept only one frying pan, but it's a huge one! We also have a set of 4 pots (we keep two of them on the pot rack, along with a colander), a sieve, a steamer basket and a stick blender.  I heart my stick blender.... 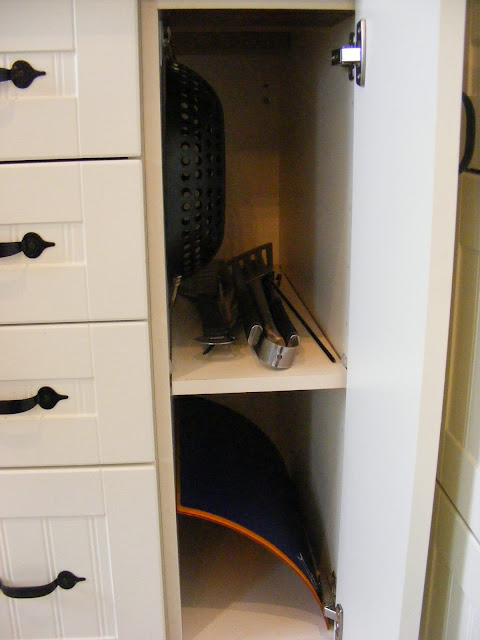 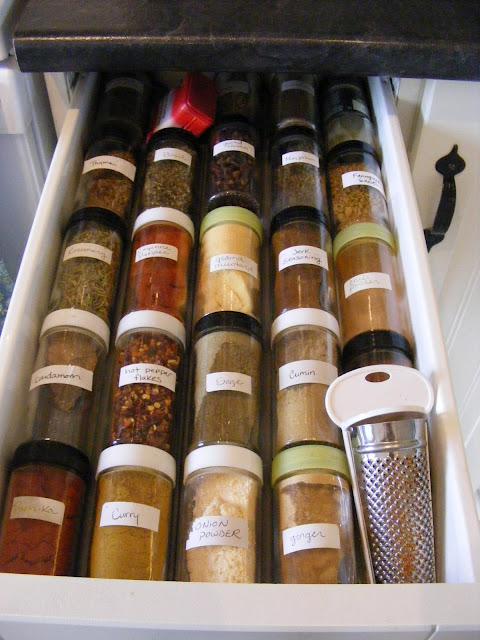 We didn't declutter the spices at all, but we probably should because I can't remember the last time I put marjoram in anything. Ever. 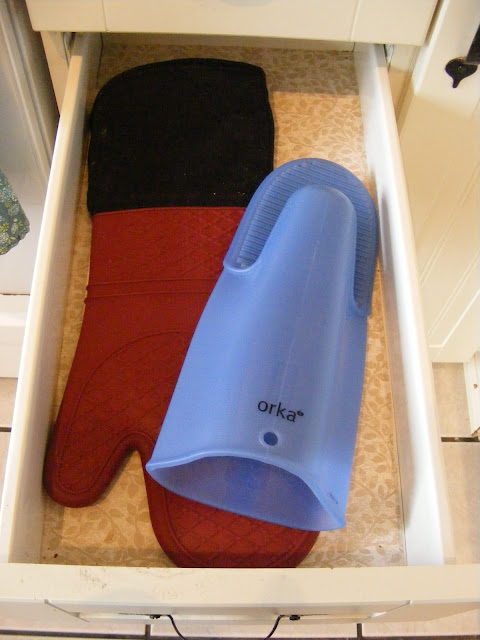 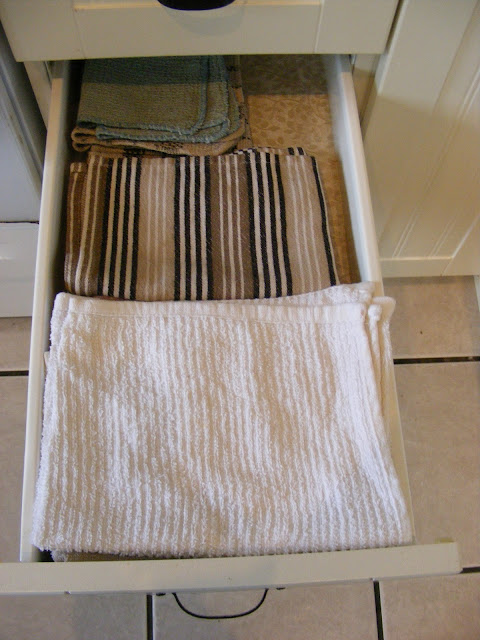 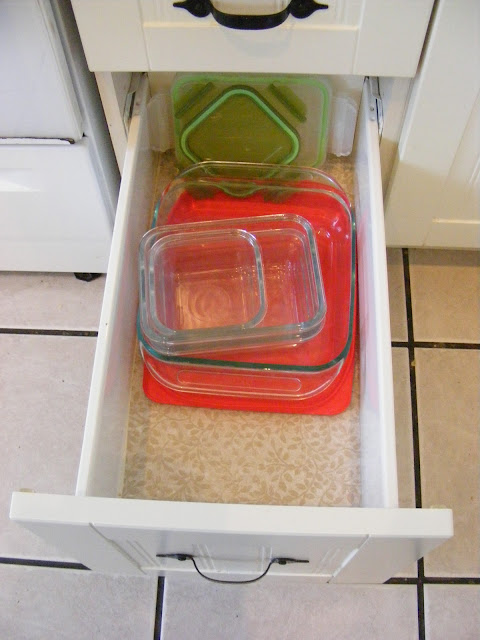 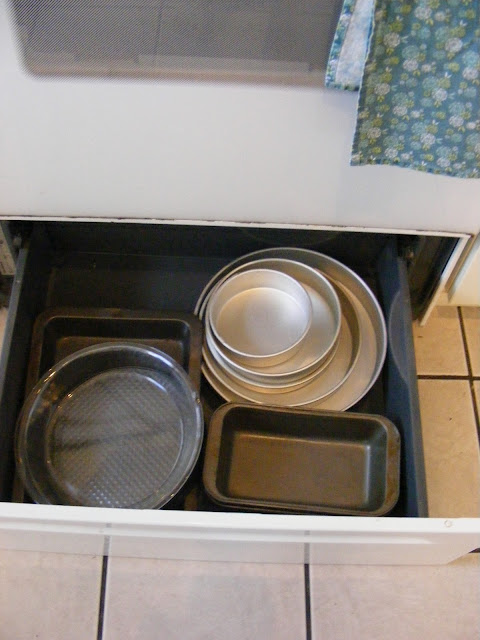 By streamlining the number of cake and dessert pans I own I believe I have also greatly streamlined the amount of curse words I will need to utter when retrieving my spring form pan. Just sayin'.... 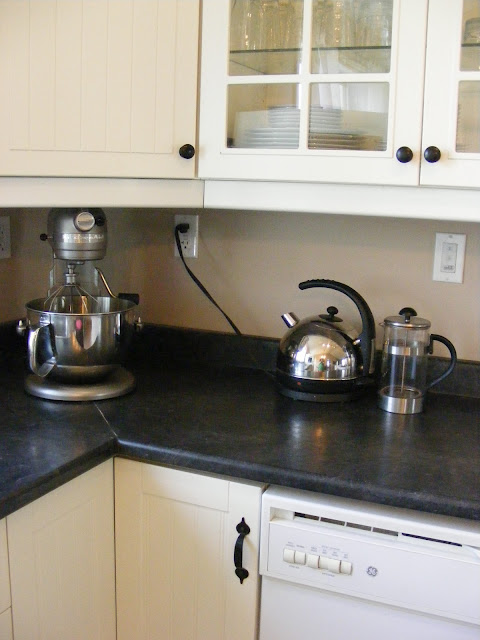 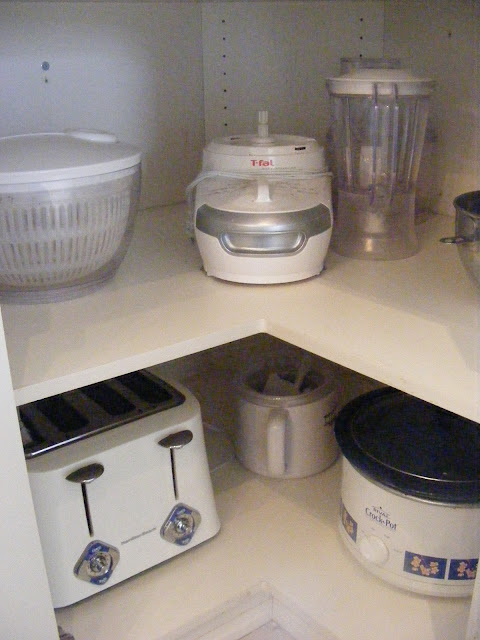 For small appliances I have a kettle and a french press coffee maker, a stand mixer (with some attachments), a food processor (with a blender attachment), a salad spinner, a toaster, a crockpot and a hand crank ice cream maker (which, um....we used three times last week...)

One thing we did that we should have done sooner is we got rid of all of the food processor attachments we never ever use.  We've been housing parts for years that we don't have any interest in using, just because they came with the food processor.  Ditching them was somehow freeing! 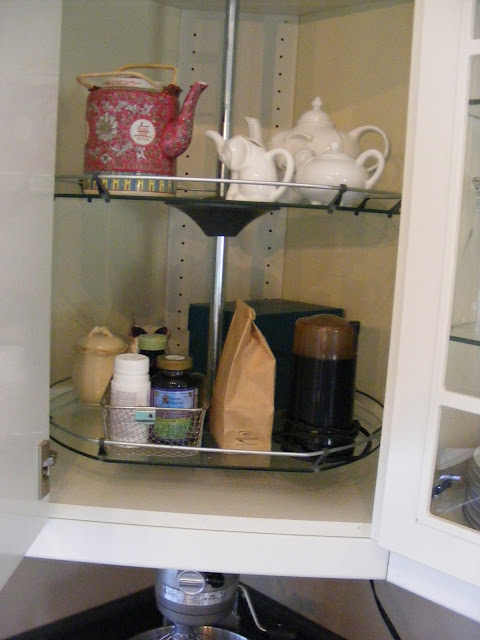 We have 2 tea pots because I have a favourite and Luke has a favourite and if we had tried to figure out which one to keep, one of us would have been sleeping on the couch. 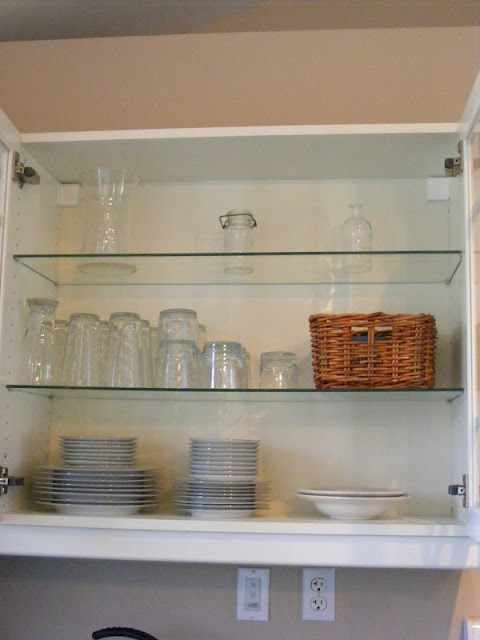 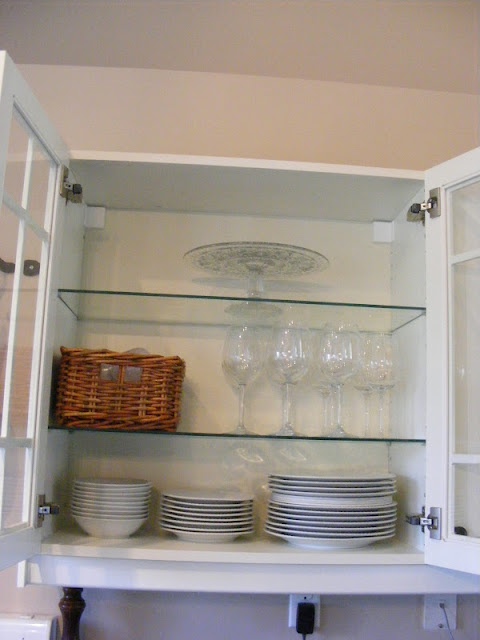 I have everyday white dishes plus white china dishes that we use frequently.  When we have both of our families over for one of the kids birthdays we rarely need to use disposable dishes, so I consider our massive amounts of dishes to be a great thing!   The baskets hide the kids cups and baby bottles.

That cake plate on the top shelf is probably going to get donated to the thrift store, I just put it there for the picture because that shelf was empty.... 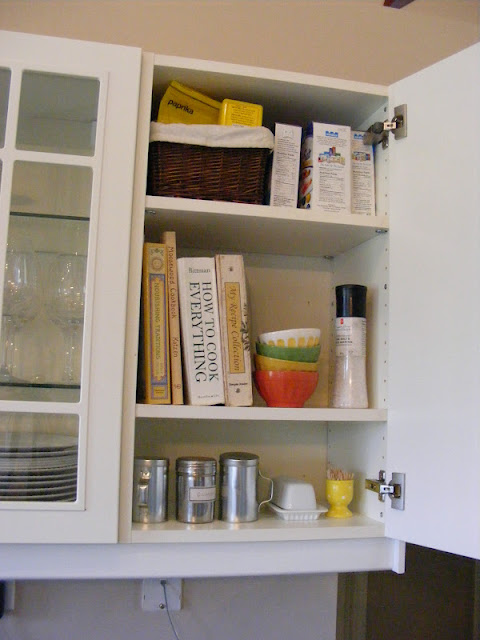 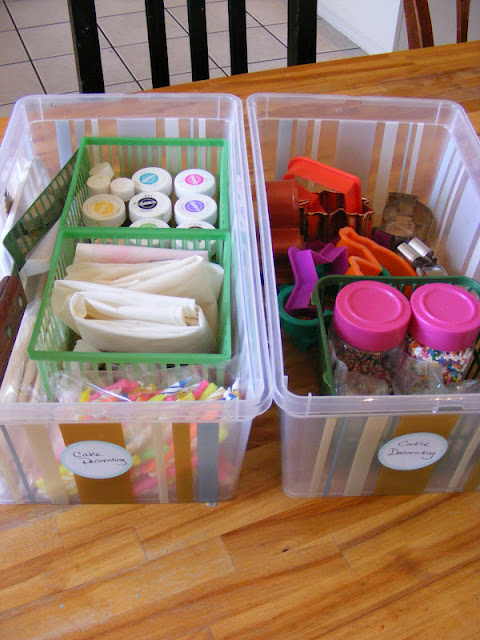 All of my cake and cookie decorating supplies now fit in two labelled shoe boxes that I store in the pantry. 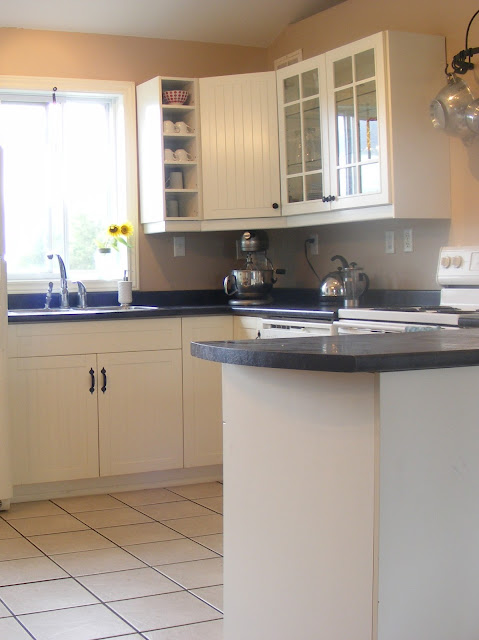 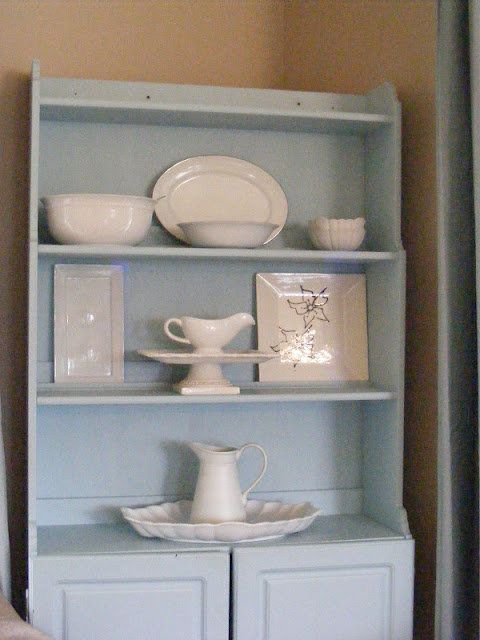 We also have a stock pot, a 22 x18 sheet cake pan, and a turkey roasting pan stored in the basement.

The verdict:  We are donating 4 diaper boxes and a laundry basket full of kitchen stuff!

I think we will probably eliminate even more as time goes on.  There were a few things we were uncertain about, so we kept them tentatively in order to avoid a massive case of purger's regret sending us frantically to the store. 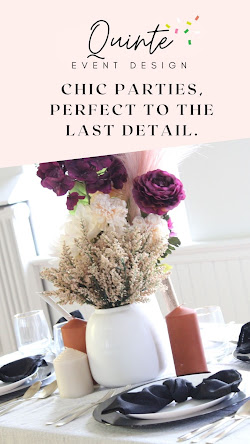